NEW BOOKS: AMERICA’S PASTOR: BILLY GRAHAM AND THE SHAPING OF A NATION BY GRANT WACKER 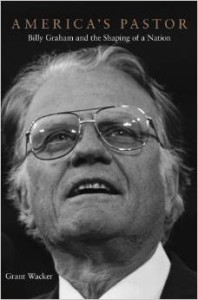 Billy Graham’s life started inauspiciously enough on a dairy farm near Charlotte, North Carolina, on November 7, 1918. The guns of the Great War in Europe fell silent on November 11. As an adult, Billy Frank––as his family called him––liked to quip that it took the world only four days to hear about his birth. Though the comment was typically tongue-in-cheek, it foreshadowed, with brilliant succinctness, an authentic American nativity story.

Professor Wacker joined the faculty of Duke Divinity School after teaching in the Department of Religious Studies at the University of North Carolina at Chapel Hill from 1977 to 1992. He specializes in the history of Evangelicalism, Pentecostalism, World Missions and American Protestant thought. He is the author, co-author, or co-editor of seven books, including Heaven Below: Early Pentecostals and American Culture. From 1997 to 2004, Professor Wacker served as a senior editor of the quarterly journal, Church History: Studies in Christianity and Culture. He is past president of the Society for Pentecostal Studies and of the American Society of Church History, and a trustee of Fuller Theological Seminary.  Wacker is a lay member of Orange United Methodist Church in Chapel Hill, N.C.