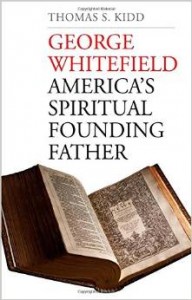 Two inns in December, one in Bethlehem of Judea, and the other in Gloucester, England. These were the humble birthplaces of Jesus and, seventeen centuries later, one of his most celebrated disciples, George Whitefield. Whitefield himself made this connection to Jesus in the original edition (it was excised in later ones) of his Journals, one of the best-selling publications of the eighteenth century in England and America. (A Short Account of God’s Dealings with the Reverend Mr. George Whitefield, which covered his early life and conversion in college, was first published in 1740, a couple of years after the initial publication of his early travel journals.) “The circumstance of my being born in an inn,” he wrote, “has been often of service to me in exciting my endeavors to … follow the example of my dear Savior, who was born in a manger belonging to an inn.’”

Thomas Kidd teaches history at Baylor University and is Senior Fellow at Baylor’s Institute for Studies of Religion. His books include Patrick Henry: First Among Patriots, published in 2011 with Basic Books. God of Liberty: A Religious History of the American Revolution was published in 2010, also by Basic Books. Additional recent books include American Christians and Islam, published in 2008 by Princeton University Press, The Great Awakening: The Roots of Evangelical Christianity in Colonial America, published by Yale University Press in 2007, and The Great Awakening: A Brief History with Documents, with Bedford Books in 2007. He has appeared on the Glenn Beck television program and written op-eds for USA Today and the Washington Post.