NEW BOOKS: EDWARDS THE EXEGETE BY DOUGLAS A. SWEENEY 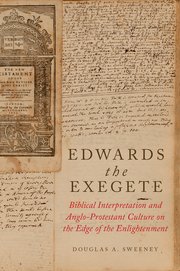 Scholars have long recognized that Jonathan Edwards loved the Bible, but preoccupation with his roles in Western “public” life and letters has eclipsed the significance of his biblical exegesis. In Edwards the Exegete, Douglas A. Sweeney fills this lacuna, exploring Edwards’ exegesis and its significance for Christian thought and intellectual history.

As Sweeney shows, throughout Edwards’ life the lion’s share of his time was spent wrestling with the words of holy writ. After reconstructing Edwards’ lost exegetical world and describing his place within it, Sweeney summarizes his four main approaches to the Bible-canonical, Christological, redemptive-historical, and pedagogical-and analyzes his work on selected biblical themes that illustrate these four approaches, focusing on material emblematic of Edwards’ larger interests as a scholar. Sweeney compares Edwards’ work to that of his most frequent interlocutors and places it in the context of the history of exegesis, challenging commonly held notions about the state of Christianity in the age of the Enlightenment.

Edwards the Exegete offers a novel guide to the theologian’s exegetical work, clearing a path that other specialists are sure to follow. Sweeney’s significant reassessment of Edwards’ place in the Enlightenment makes a major contribution to Edwards studies, eighteenth-century studies, the history of exegesis, the theological interpretation of Scripture, and homiletics.