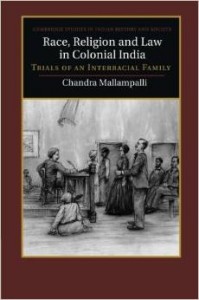 In a crowded commercial neighborhood of the south Indian city of Bellary, there once stood a distillery owned and operated by a Tamil-speaking Protestant named Matthew Abraham. Matthew came from the low-ranking paraiyar community (one among so-called untouchable groups). In 1820, he married a woman of Anglo-Portuguese descent, Charlotte Fox. Since 1800, Bellary was under the rule of the English East India Company. So strategic was Bellary’s location that the Company established a military cantonment in the northwest section of the city. During the 1830s, Matthew became wealthy by producing liquor and selling it to troops. His younger brother Francis assisted him at the distillery and assumed its management after his death. For a time, the interracial couple, their two ‘half-caste’ sons, Francis, and members of their extended family shared a common household and enjoyed a relatively affluent lifestyle under Company rule.

Chandra Mallampalli began his teaching in Westmont’s history department in the fall of 2001. He came to us from the University of Wisconsin-Madison, where he completed his doctoral work in modern South Asian history. Prior to receiving his doctorate, he earned a Master of Divinity from Fuller Theological Seminary and worked as a journalist in South Asia.  His scholarly work addresses a range of interests concerning the intersection of religion, law and society in colonial India.   With funding from the National Endowment for the Humanities, he conducted research in India and the UK for his book, Race, Religion and Law in Colonial India.  At present, he is working on a project concerning the Wahhabi movement in colonial south India.  Dr. Mallampalli is a life member of Clare Hall, Cambridge University.  At Westmont, he teaches courses in World History, modern South Asia, British Empire, and comparative Asian history. He is married to Beverly Chen, a licensed clinical social worker and therapist.